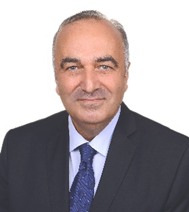 He was born in Üsküdar, a county of Istanbul in 1966. He is a 1983 graduate of the Kabataş High School and is also 1987 graduate of the Naval Academy. He completed his master's degree in International Relations at Atılım University in 2006. Following his duties as a division officer, department head, navigation officer, executive officer in various Turkish warships which are under the Turkish Fleet Command, he was deployed between 1994-1995 and among 1997-2000 as commanding officer, an auxiliary and a mine sweeping ship. He received Excellence Minesweeper Ship Award related Operation, Training and Material as a Commanding Officer. Ashore, he served in a variety of assignments, most notably as project officer, inspection manager, trainer and security manager at several important headquarters. He participated in many courses, trainings, exercises and missions within the scope of his national and international duties and retired in 2011. He was tried in the Sledgehammer Trial in 2012 and was acquitted in 2015. He works in private sector with his all experiences and also writes on marine and maritime security issues in domestic and foreign newspapers, magazines and websites.